Estonia is the most northerly of the three Baltic states, and has linguistic ties with Finland. 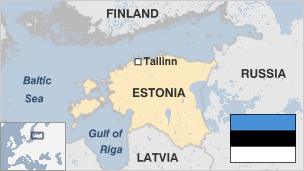 Since regaining its independence with the collapse of the Soviet Union in 1991, Estonia has become one of the most economically successful of the European Union's newer eastern European members.

Ruled at various times during the middle ages by Denmark, the German knights of the Livonian Order, and Sweden, Estonia ended up part of the Russian Empire in the 18th century.

It experienced its first period of independence in 1918, following the end of the First World War and the collapse of the Russian Empire.

Kersti Kaljulaid was elected by parliament as Estonia's first female president in October 2016.

A biologist by training, Kaljulaid started her political career in 1999 as an economic adviser to Prime Minister Mart Laar. She served as Estonia's representative in the European Court of Auditors between 2004 and 2016.

The office is largely symbolic although it gained weight after outgoing President Toomas Hendrik Ilves carved a role as an outspoken critic of Russia and a campaigner for government digitalisation and cybersecurity.

Juri Ratas, whose party is popular among Estonia's large Russian-speaking minority, heads a coalition government which was sworn in in November 2016.

He was asked by the president to form a government after his predecessor Taavi Roivas lost a parliamentary vote on confidence when one of his junior coalition partners deserted.

Mr Ratas's Centre Party, which had been in opposition for a decade, has as partners the leftist Social Democrat SDE and conservative IRL.

Before taking office he indicated that his government would lean towards the West.

Television is Estonia's most popular medium, while print media are losing ground to online outlets.

The broadcasting industry has attracted foreign media groups; the main privately-owned TVs are run by Swedish and Norwegian concerns.

Some key dates in Estonia's history:

1944 - Estonia reannexed by the Soviet Union. Tens of thousands of Estonians deported to Siberia and Central Asia.

1988 - Popular Front campaigns for democracy. "Singing revolution" brings a third of the population together in a bid for national unity and self-determination.

2001 October - Former member of the Central Committee of the Soviet-era Communist Party Arnold Ruutel sworn in as president.

2001 December - President Ruutel signs into law a bill scrapping the requirement for candidates for public office to be proficient in the Estonian language.

Siim Kallas becomes prime minister in a new coalition government in which his Reform Party shares power with Centre Party.

2003 September - Estonians vote overwhelmingly to join the European Union in a referendum.

2005 February - Foreign Minister Kristiina Ojuland is sacked after classified documents are found to be missing from ministry.

2005 March - President Ruutel declines invitation to attend Moscow celebrations in May marking the anniversary of the end of World War II.

2007 February - Parliament passes a law prohibiting the display of monuments glorifying Soviet rule, paving the way for the relocation of a controversial Red Army war memorial in Tallinn.

2009 June - Parliament approves move to double size of Estonian contingent serving in Afghanistan as part of the International Security Assistance Force (ISAF), from 150 to around 290 soldiers.

2011 February - Parliamentary elections. The Reform Party and its coalition partner IRL retain their majority in parliament with 56 out of 101 seats.

2012 October - Estonia and Russia re-start talks on a border treaty, seven years after Russia withdrew from an agreement signed in 2005, in response to a dispute over treatment of the Soviet past.

2014 September - Amid tension with the European Union and Nato over Russian intervention in Ukraine, Estonia accuses Moscow of abducting border guard Eston Kohver. Russia says he was on the Russian side of the border and accuses him of spying.

NATO reinforces its presence in the Baltic states and its forces conduct major military drills in the region.

2015 September - Russia returns detained border guard Eston Kohver in return for Aleksei Dressen, who was imprisoned in Estonia in 2012 on charges of spying for Moscow.

2017 March - The first of about 800 British troops arrive in Estonia as part of a major Nato mission in the Baltic states to deter what the alliance regards as Russian aggression.

2017 May - A Russian citizen is sentenced to five years' imprisonment on charges of spying for Moscow.

No comments yet. Yours will be the first!